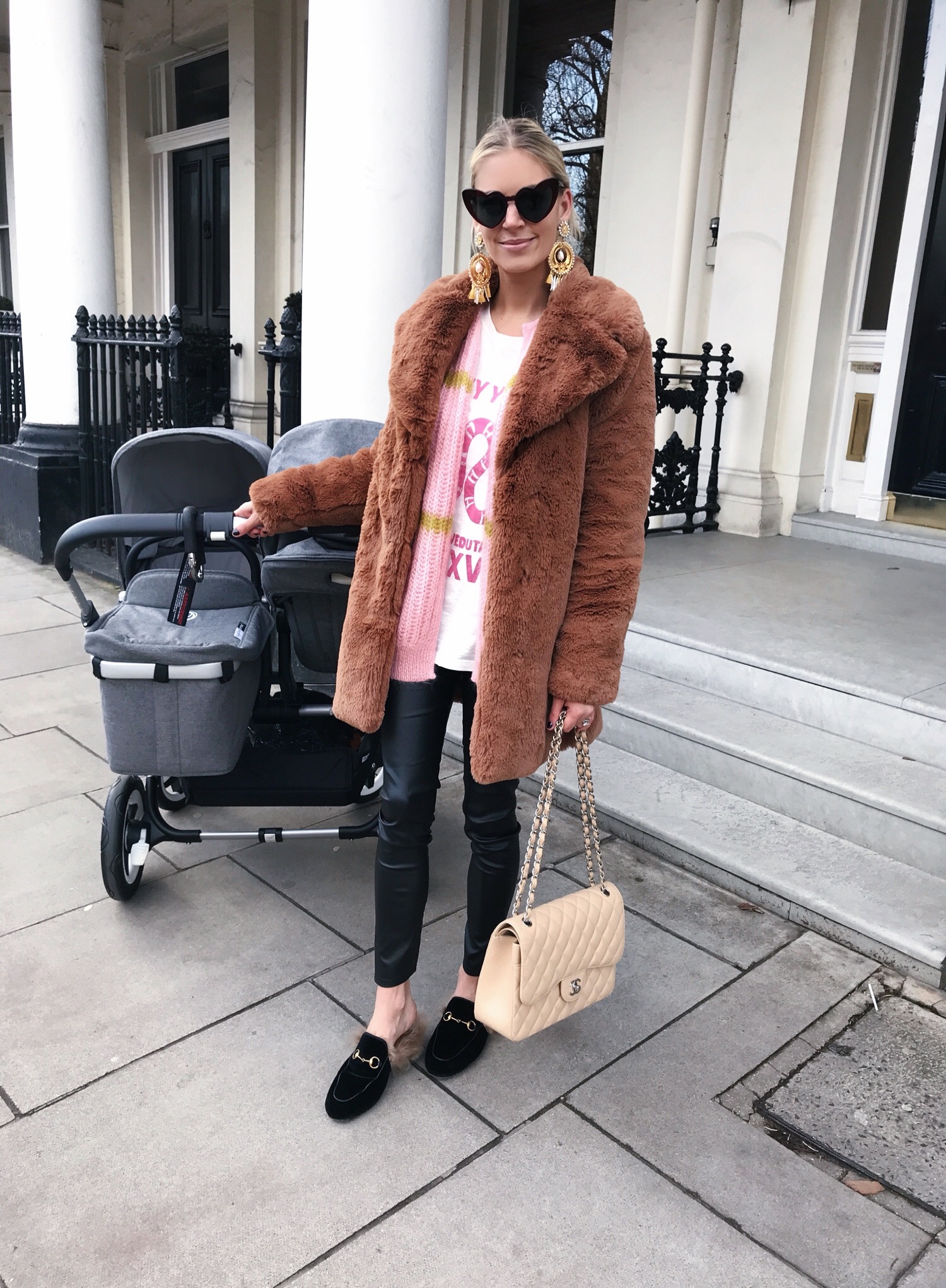 Happy Wednesday! Hope you all had a wonderful weekend. A few of you have been asking me to write a post about what my typical day is like with two babies so thought I would do that today. Let me just start off by saying that there is no such thing as a typical day with my two! Mila has a routine but at the moment I am feeding Anoushka totally on demand and so I am sort of working around that. I am slowly starting to get her into a routine and as I mentioned before she sort of follows Mila’s routine (which is amazing as they both sleep 2 hours over lunch time from 1-3) but I am so relaxed about it this time so I really don’t mind that I have yet to establish a proper one. Saying that however I do think routine is incredibly important and that babies love it. I was so strict about a routine with Mila I think she was basically in one three days after being born lol but she was also just that way inclined – she used to wake up like clockwork just before she was due for a feed.

I also wanted to say as I get a lot of messages about how effortless it seems for me that OF COURSE we have crazy moments too! I have two under two, am only six weeks in so still trying to find my groove and although they are incredibly sweet well behaved little girls, just like anyone else there are tantrums and off days. I also have way less time for anything – there are so many blog posts I want to write but my kids come first and I just have to accept that I do what I can when I can. However I am a very much always look at the positives in life kind of person and with babies I know that things are always a phase and if there are tantrums or sleepless nights I know they won’t be there forever, so I never really feel the need to focus on those.

Another question I get asked a lot is how do I have time/can be bothered make the effort to look glamorous every day when I have two little ones. Short answer: I am very organised and I LOVE getting dressed up. My life revolves around my little ones and they are my biggest blessing but I always think its important to have something for yourself and my getting dressed up and having my blog is my thing for myself. I am really quite OCD about most things in life and of course there are days when things don’t go to plan – with kids you can never 100% plan everything because they have off days and because their needs always come first. But I try to plan as much as possible. Its all about time optimization. In terms of what I wear every day, I plan my outfit the night before because I know that I have a certain (very limited) amount of time each morning to get myself together. I have a blowdry every now and then at home (using Ruuby app which is an amazing service for those living in London!) because I always feel like that saves me so much time (a great girl I found through Ruby does it in about 30 mins and then I don’t have to worry about my hair for about 3 days!) or then I tie my hair back into a messy bun. My hair is really low maintenance – I wish I had a gorgeous thick mane but actually my fine wispy Finnish hair is a blessing when you have kids haha as its so easy to manage. I have my make-up routine down to a t and it takes me about 7 minutes to do it (I have included all my go-to products below.)

I have also mentioned before that I think its important to accept help when and where you can – whether thats from parents or a nanny. Some mums want to do everything entirely themselves and that is 100% totally understandable but I have a nanny/housekeeper who has been with us since Mila was 8 weeks old. My mother visits quite a bit as does my mother in law but neither of them live close by so I made the decision to get help elsewhere. She used to do a couple of hours a morning but now does a little bit more after Anoushka’s arrival. The biggest help for me is the fact that she takes care of things such as washing and keeping our home tidy which allows me to then spend most of my time with the girls. She will also watch the girls if I absolutely have to do something –  for example when I drop Mila off at nursery she will look after Anoushka (after Anoushka got sick at three weeks old I decided I would rather keep her as far away as possible from busy places like nurseries so she is better off staying at home during the drop off) or if I go out with Mila for half an hour in the park just us then I will express milk and then she can feed Anoushka. I don’t really go to events and I have very few reasons to spend time away from the girls but its nice to have that flexibility if I do. With someone that I trust. As a mother I think its really hard to trust someone with your children – I am very hands on, a total control freak and I probably drive my nanny crazy because if I am away from one of the babies then I am constantly sending her messages asking if they are ok but I also think you have to learn to let go a little bit. But I am not sure I will ever relax being away from them – I remember when we went to a hotel for a night with my husband back in August over the bank holiday weekend and I spent half the night watching Mila sleeping on the security camera which is connected to my phone rather than actually sleeping.

What I wear each day depends on the weather a little bit and what my plan for the day is. For example if I have a meeting or am going to lunch or something (which again I am not really doing at the moment as I prefer to keep Anoushka in our home as much as possible!) I will be more dressed up whereas if I am just at home/running errands with the girls all day then I will be more dressed down (such as today in my leather leggings, t-shirt and thick knit cardigan!) Most days I wake up at 7 and at the moment we often have a bit of lazy time in our pyjamas until my nanny arrives. I give Mila breakfast and feed Anoushka and I always pick out the girls clothes and get them dressed once they have both had their breakfast. I then usually pop out with Mila – its been SO important for me that I do something with her every day even if its literally just getting a coffee but I make sure that I get that little bit of “us” time. We often go for a walk in the park or run some errands together or I take her to a soft play area for a bit of fun. (I always express the night before at around 9pm when Anoushka is asleep so that I have a full bottle of milk for the next morning if we decide to go out and she needs feeding whilst I am gone.) Once I am home I get myself ready taking Anoushka with me into the bathroom when I shower (she is pretty much attached to me 24/7 when I am at home unless she is sleeping and then I just put her in her moses basket either in our bedroom, in the lounge or in her bedroom.) My time for work is when the girls sleep their lunch time nap – most days it is between 1 and 3 in the afternoon but if Mila goes to nursery then she has an earlier nap time from 11 to 1. On those days I have a  bit more time to work in the afternoon – you forget how much newborns/babies sleep so I have her next to me whilst I am doing bits and pieces on my computer.

The afternoons when Mila is not at nursery are spent with both the girls. I think what I find tough at the moment is that after Anoushka’s health scare I am hesitant to take her out a lot – walks are fine but I don’t want to take them out to play areas with lots of other kids around. But I feel bad for Mila – she is at the age where she wants to play and learn all the time and having to keep her indoors I feel like I am keeping her from experiencing life! You can’t protect you newborn entirely if they have a sibling but I think until she is three months old and a bit stronger I have to take more precautions mainly because its winter time. The less she is exposed to things the less likely she is to get sick again. We had booked to go to the mountains for a week at the end of January but have changed it now to the end of February when she is 3 months old and has had her immunisations so she is stronger. But there are things we can do at home – Mila loves painting and I bought her an easel for Christmas so she is super happy with that. And she goes to nursery three times a week so at least she has that exposure. When the weather warms up and Anoushka is a bit older it will all fall into place properly I am sure.

Both girls go to bed around 7 and at the moment thats been working really well. I do Mila’s bath first and Anoushka second or sometimes I wait until Mila is in bed before giving Anoushka a bath and feed so then Anoushka ends up going to sleep at around 7:30. I then spend the evenings either relaxing, doing bits for my blog or occasionally going on a date night! But of course that also doesn’t always “go to plan” just the other night I had a lovely orchestra of babies as I like to call it as both of them started crying at the same time and I was running from one room to another for the better part of an hour trying to get each one to settle! But thats just what having babies is all about. So that’s it really. Every day is a little different but also sort of the same. Its hectic at times but I also think if you are organised and plan well then its totally manageable and you don’t need to feel like you are always rushed off your feet! I hope you enjoyed and ill be doing a ski related post next xx 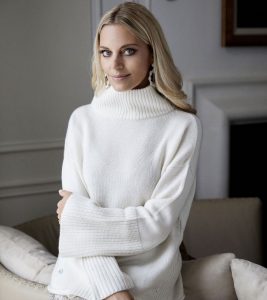