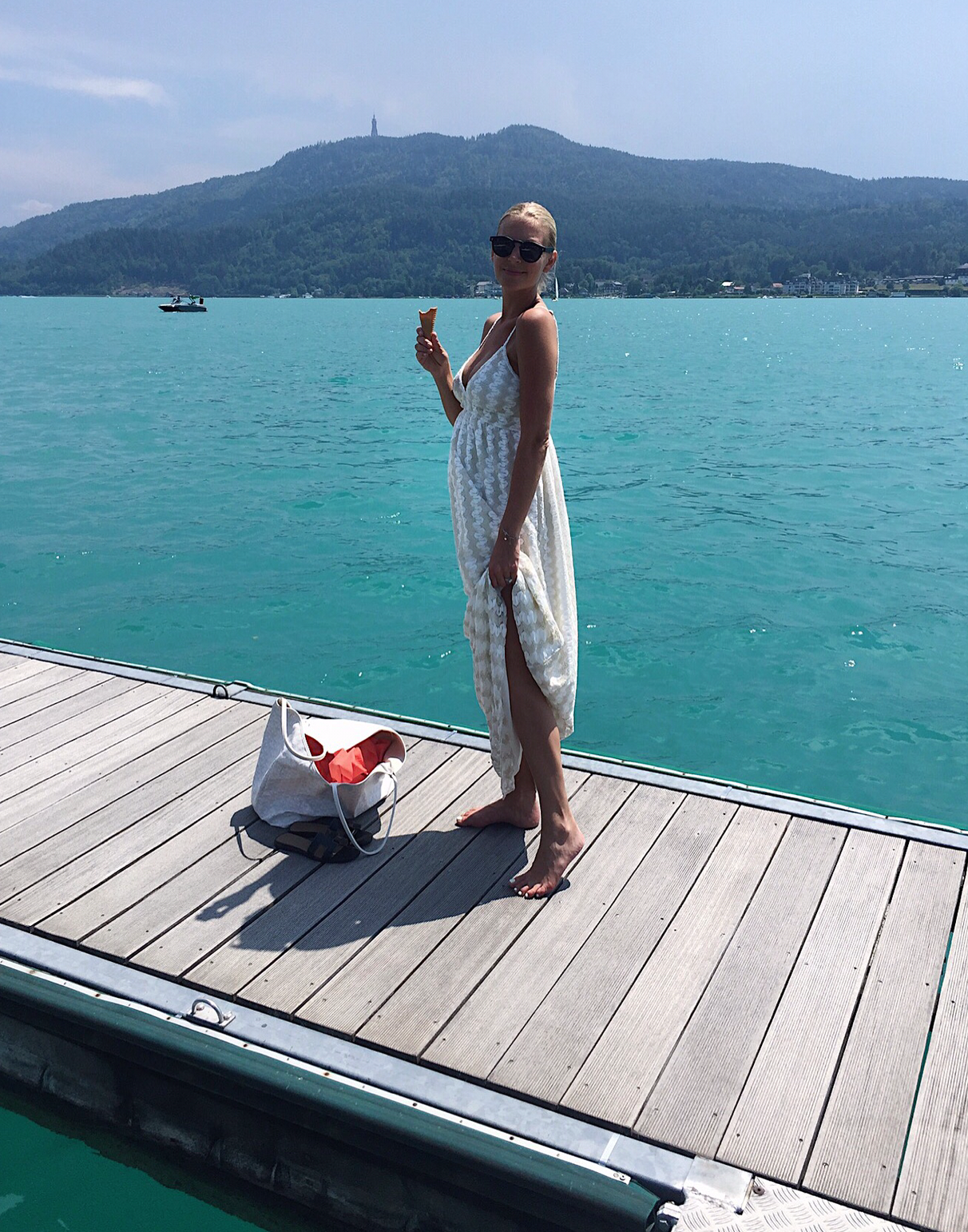 Happy Tuesday! Back from Austria from what I have to say was one of the most beautiful weddings I have ever been to. It was one of my closest friends who got married and she is very creative and the way she put everything together was just so magical. First of all the area in Austria Worthesee where the wedding was held was stunning. It is by a lake with waters that actually make you feel like you could be in the Maldives because they are so strinkingly blue. On the Friday evening they held a schnitzel & drinks evening at a local restaurant by the lake – it was very Austrian with a traditional band, lots of the women (including the bride) dressed in dirndls and delicious local food. The following day the wedding was held in a beautiful cathedral after which we all headed to the property where the reception was held. Drinks were served on the lawn and every little detail was perfect – it was like something out of a midsummer nights dream.  Wheelbarrows were filled with flowers, hay stacks were scattered across the lawn for people to sit on, fairy lights and candles were scattered across the garden and it all blended in perfectly with the natural surroundings. But the most breathtaking part was the barn where the dinner was held. It was filled with long white tables that were covered in flowers and huge silver candle holders and the entire ceiling was decorated with a sort of hanging garden made up of flower pots and greenery and even the walls were covered in greenery. I have never been to a wedding like this before – it was elegant but also so imaginative and unique.

It was also so lovely to spend some quality time with my husband. On the Saturday morning before the wedding we hired a private boat with another friend to take us around the lake and then we spent the rest of the day paddle boarding, swimming and having a long lazy lunch before getting ready. Our journey home was a NIGHTMARE though – after such hot weather, the area got hit with insane thunder storms which actually started at around 1am on night of the wedding and continued until late afternoon yesterday. We had flown into Ljubljana on Friday as its the closest airport you can take a direct flight to (a 1 hour drive from Worthesee) but the day before we left I ended up booking us a new return flight from Venice which was supposed to leave at 3:30pm getting us back to London at a decent time so we could collect Mila from my parents house etc (the original return flight landed at 11:30pm.) So we left the hotel at around 11 and started driving to Venice but I have never ever seen so much rain in my life. The thunder storm was crazy and I had to pull into a petrol station and take cover for 15 mins as the rain was so heavy we couldn’t see the road! And then when we finally got to the airport we discovered our flight was 3 hours delayed so we had to sit around waiting which is never that fun. Anyways we finally landed just after 7pm and my parents came to Gatwick to meet us and it was so amazing to hold Mila in my arms again (2 days feels like a lifetime when its your baby!)

Anyways todays post is actually focused on “wow” dresses as I have been trying to find one for Mila’s party (still haven’t chosen but I have ordered a few options.) I wanted something white but lets see some options are quite different to what I initially thought I wanted – its always the way that when you are really looking for something you don’t find it but when you aren’t you see so many beautiful things (note to self: if you see something you absolutely love just buy it on the spot!) There are a few sites that I have fallen in love with such Moda Operandi and Fwrd because they have lots of labels that I love that aren’t really sold elsewhere online. So I have put together my favourite wow pieces below in case anyone is looking for a dress for a special occasion. xx